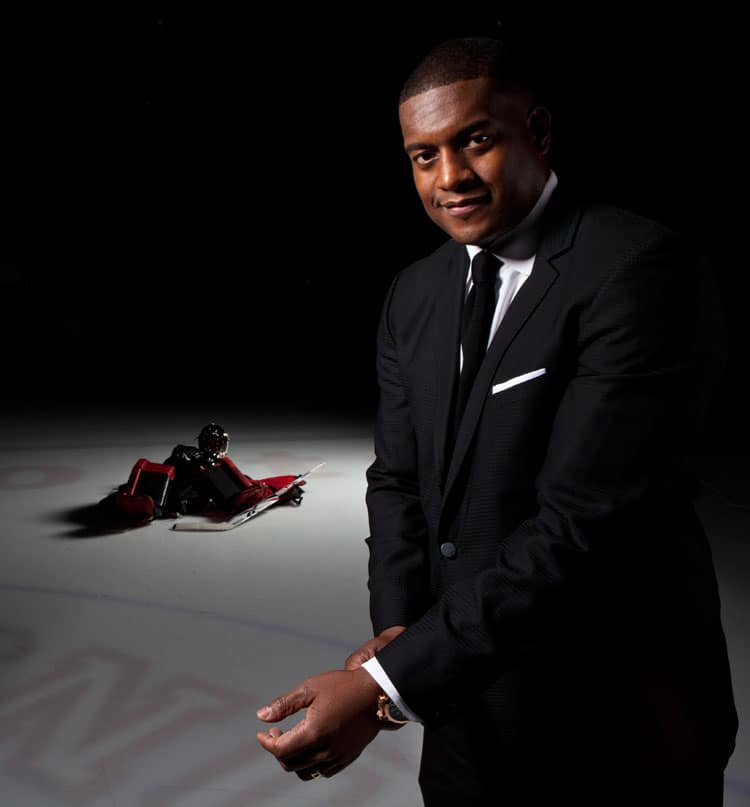 Twelve-year veteran NHL goaltender, Kevin Weekes, can also add the titles of broadcaster, philanthropist, and advocate to his already long list of accomplishments. In 1993, Weekes was drafted 41st overall by the Florida Panthers in the NHL entry draft. Weekes played parts of 12 NHL seasons with seven teams, including an appearance at the 2002 Stanley Cup Finals with the Carolina Hurricanes.

In September of 2009, Weekes made history when he became television’s first black hockey analyst. Weekes joined CBC’s iconic program, Hockey Night in Canada as a colour commentator, as well as co-host of CBC’s After Hours. Weekes transitioned seamlessly to the main stage of the world’s most popular hockey show when he took a position on the panel alongside Ron McLean at the famous Studio 42. Weekes can also be seen on the NHL Network as one of the faces of its nightly flagship program, NHL Tonight, as well as in guest appearances on NBC and MSG Network’s Hockey Night Live! One of the highlights of his career was speaking on Capitol Hill in Washington twice last year, along with an invitation to the White House as a representative of the NHL.

Weekes has appeared on One Life to Live, Everybody Hates Chris, All My Children, and The View.

Known as one of hockey’s most charitable citizens, he is dedicated to numerous causes and youth based initiatives throughout North America and Barbados. Weekes’ philanthropic efforts have been focused on youth education and sports based charities, empowering youth to fulfill their dreams.

In unrelated news, one of the charities Kevin supports is Sky’s the Limit, a group that distributes refurbished computers to school and community centres across Toronto.

Kevin tells stories from his hugely successful career in sports and broadcasting, inspiring audiences with the lessons in motivation and leadership that he has learned over the years.

Kevin is a master at creating great experiences for his audience. Have him at your golf tournament or other special occasion for a classy evening.