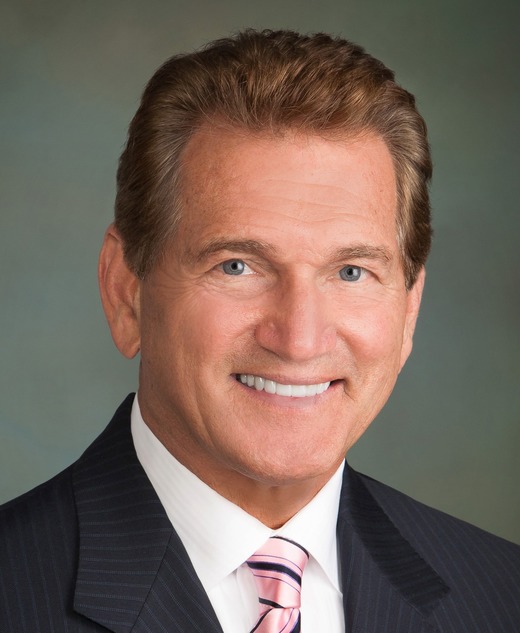 Joe Theismann is an entrepreneur and the former star quarterback for the Washington Redskins.  Most recently, he spent the last 2 decades working for ESPN and the NFL Network as an NFL analyst.

Joe graduated in 1971 from the University of  Notre Dame, where he received All-American honours in both Football and Academics.  That same year, he was runner up to Jim Plunket for the Heismann Trophy balloting. Joe chose to begin his career with the Toronto Argonauts of the Canadian Football League after being drafted by the Miami Dolphins and Major League Baseball’s Minnesota Twins.

A 12-year NFL veteran, Joe played in 163 consecutive games from 1974-1985 for the Washington Redskins and holds Redskin records for passing yardage (25,206), completions (2,044) and attempts (3,602).  He was a two-time Pro Bowl selection and Pro Bowl MVP leading the Washington Redskins to a 27-17 victory over the Miami Dolphins in Super Bowl XVII.

Joe was selected as the NFL’s Man of the Year in 1982 for his community service and dedication to the health and welfare of children.  In 1983, he won the league’s Most Valuable Player Award, leading the Redskins to a second consecutive Super Bowl appearance. Joe Theismann’s career ended abruptly in 1985 after sustaining a badly broken leg during a Monday Night Football game against the New York Giants on national television.  In 2003, he was inducted into the College Football Hall of Fame and in 2013 received the Walter Camp Football Foundation “Distinguished American” Award.

With every chapter of his life, Mr. Theismann evolved from the athlete to the ultimate businessman.  An Emmy award-winning analyst, businessman and athlete, he utilizes his gifts, talent and high energy to share his strategies for handling unforeseen change.

Joe chose to begin his career with the Toronto Argonauts of the Canadian Football League after being drafted by the Miami Dolphins and Major League Baseball’s Minnesota Twins.

In his charismatic and entertaining style, Joe Theismann draws parallels between his successful career as an NFL quarterback and YOU—the executive, manager, salesperson, group, or individual—with the goal of Managing to Win! He knows and understands that good management and effective leadership is not a game of following the leader: It is about PEOPLE—listening to them… trusting them… and motivating individuals to take ownership of team goals. For example, Joe Theismann shows that an effective leader cares about and trusts subordinates and demonstrates it by empowering individuals to take risks in order to perform above levels that have become comfortable.

This dynamic presentation outlines the game plan that brought Joe Theismann success both on and off the football field. Former NFL MVP quarterback and Super Bowl champion, he reveals his Game Plan for Success by drawing parallels between winning in football and in business. Joe Theismann focuses on how to succeed under pressure—when it’s “4th and 1″—and how to adapt quickly to unexpected situations—when you’re faced with a “blitz” instead of a “zone.” He urges individuals and organizations to set goals and correct errors each step of the way, an approach that builds momentum, which, once on your side, would be hard for even the best “defence” to stop!

Drawing from personal experience, Joe Theismann knows how to deal with the Challenge of Change. On November 18, 1985, he was on top of his game—a two-time Pro Bowl player and the most productive quarterback in the history of the Washington Redskins. Later that evening, he found himself in a hospital bed with a compound fracture to his leg, shattering both his career and his boyhood dream. At age thirty-five, he was faced with starting over his personal life and professional career. In this stirring presentation, individuals and organizations learn how to tackle change by keeping a positive mental outlook and committing to a vision that guides you to the top.