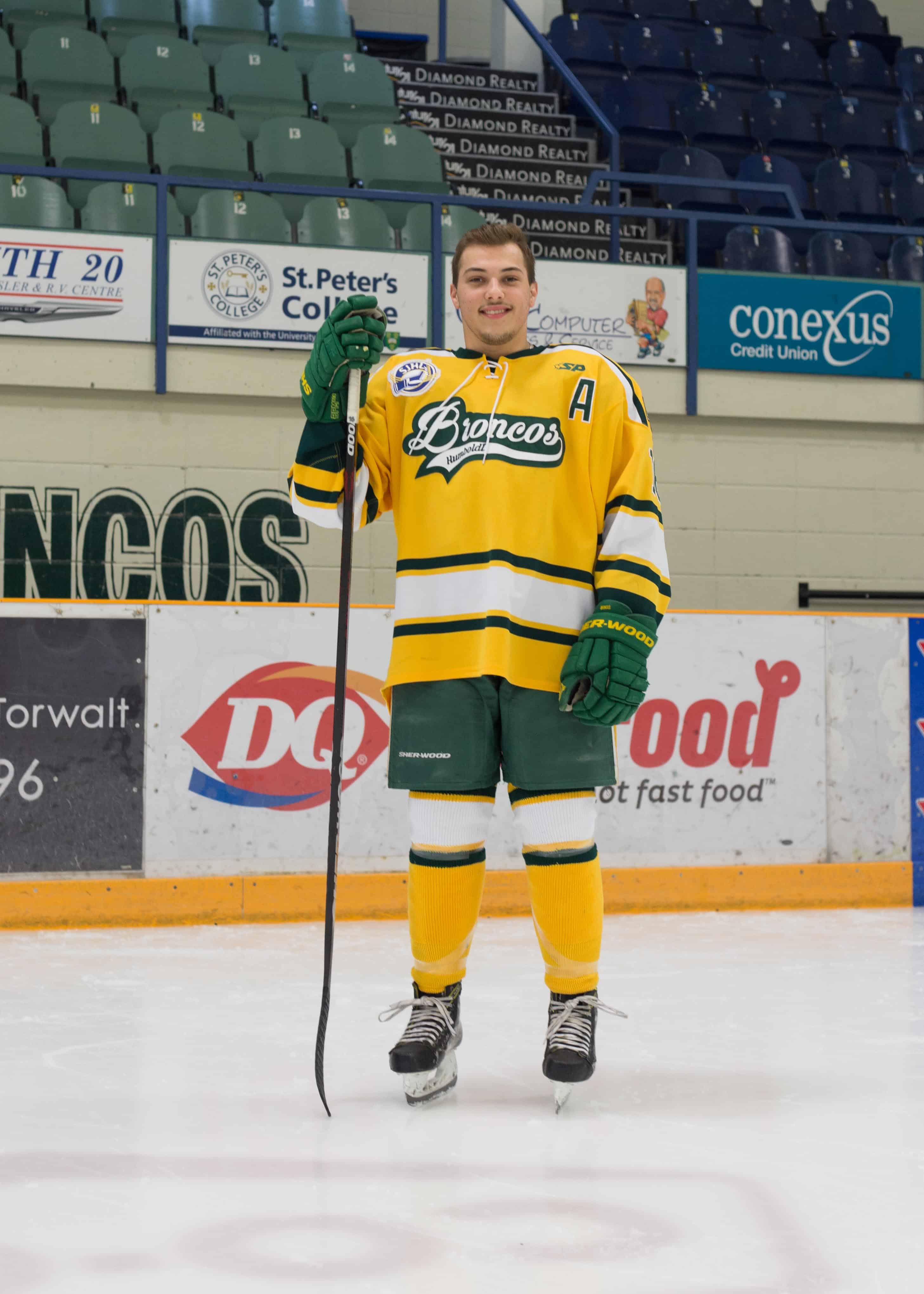 Kaleb Dahlgren beats the odds. Diagnosed with Type 1 Diabetes at the age of four, Kaleb was told by coaches and scouts that he would never succeed in hockey. Instead of defeat, Kaleb used the negativity as motivation. He worked relentlessly and played the highest level of hockey each year of his young career. His own struggles inspired him to create the program Dahlgren’s Diabeauties. This program uses hockey as a platform to shed light on Type 1 Diabetes, and provide support for children living with the disorder.

In order to officially launch Dahlgren’s Diabeauties, Kaleb asked to be traded to a bigger hockey city. A larger team provided greater exposure to the program and cause. He was traded from small-town Wilcox Notre Dame Hounds to the Humboldt Broncos. On April 6th, 2018, on-route to a playoff game in Nipawin, the Humboldt Broncos’ team bus was involved in a horrific crash. This crash resulted in the death of 16 players and left 13 players with critical injuries.

Kaleb was one of the 13 players. He suffered extensive injuries including a fractured skull, traumatic brain injury, and several fractures in his neck and back. A true fighter, Kaleb was determined to return to hockey. He was further driven to make a difference in his community. Shortly after being discharged from the hospital, Kaleb’s pre-accident verbal commitment to the York Men’s Lions Varsity turned into an official commitment. He is a key part of the York University Lions ’community.

Currently, Kaleb is working to grow the impact of Dahlgren’s Diabeauties. Additionally, he supports various charities including special needs groups and shares his message of hope with groups across North America.

In unrelated news, Kaleb requested a trade to join the Humboldt Broncos so he could be in a hockey market to launch his foundation for youth living with T1 diabetes.

Words to Live By

No matter the circumstance, Kaleb has lived by a select set of trusted principles. These principles reflect his ingrained values and positive approach to life’s challenges. Kaleb’s vibrant personality and positive outlook on life have helped him achieve his goals. His experiences and hardships have shaped him to become a great leader, on and off the ice. In this keynote, Kaleb presents the importance of holding yourself accountable in order to achieve your goals. When you believe in yourself and you hold yourself accountable, you can reach greatness, even in the face of tragedy.

My Life as a Fighter: Living with and beyond illness

Since his diabetes diagnosis, Kaleb has made it clear that he would not take no for an answer. Rather than giving up on his dreams post-diagnosis, Kaleb worked hard to prove stats wrong. From rising through hockey ranks to helping children with diabetes realize their worth, Kaleb has embraced his “illness,” and has changed many lives in the process.

In the face of adversity, one can either back down or stand up and fight. Kaleb never backs down.

A natural-born leader, Kaleb works hard to better every community he’s involved in. Whether it’s the Humboldt community, the diabetes community or the York Lions, Kaleb isn’t afraid to take on a leadership role. He has been received nine awards for his community and team commitments. He knows what it takes to be a leader and is ready to teach others how to embrace their leadership qualities within themselves.