Posted at 09:30h in Uncategorized by Admin User 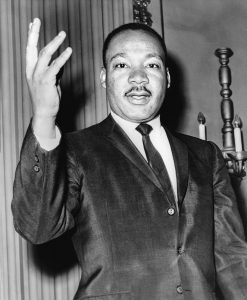 Today we celebrate (what would have been) Martin Luther King Jr.’s 91st birthday.

MLK Jr. was a Christian minister and leader in the Civil Rights Movement from 1955 to his assassination in 1968.  His influence on advancing civil rights in a peaceful manner was inspired by his Christian roots and Gandhi.

In 1964, MLK won the Nobel Peace Prize for his work in combating racial inequality through nonviolent resistance. The following year, he had helped organize the Selma protest marches.

TIME Studios have a dream…

In December TIME Studios announced it will debut its “groundbreaking immersive project” titled The March. The project will open in Chicago on February 28, 2020, at the DuSable Museum of African American History.

“The March exhibit at the DuSable Museum will feature several levels of immersion, including spatial audio and a genre-pushing ten-minute virtual reality experience, to present the most realistic digital rendering of a human ever created with the recreation of Dr. King delivering the iconic ‘I Have a Dream’ speech. The exhibit will run from February 28, 2020, until November 2020.”

Martin Luther King Jr. was well-known for his engaging and powerful speeches. ‘I Have a Dream’ is arguably the most recognized speech in history and has been immortalized in popular culture. The VR experience of the speech will be a completely authentic way to re-live the 1963 March of Washington.

“The March provides an educational and historically accurate experience through the use of the most ambitious and complex VR techniques to date, while also introducing the next generation of creators to immersive technology.”