Posted at 00:10h in Uncategorized by Admin User

Yesterday marked the one month countdown to TIFF 2019!

Each year, hundreds of thousands of film lovers (and industry members) fill the streets of Toronto. Their passion for the art of film lights up the city like nothing else. (Well, arguably, like this year’s Raptors parade) If you’re wanting to visit Toronto, this is the time. With all the pizazz, you might get a little overwhelmed as to where to go, what to eat, and what to see.

So,  we’ve created a little “TIFF 2019 Guide” to making your festival experience that much better. 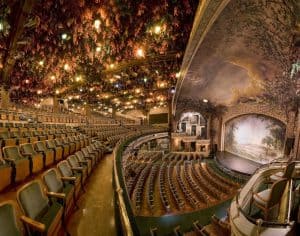 TIFF uses around 30 Toronto venues. They vary from historical buildings, to theatres, to art galleries. Here are our top 5 picks for favourite festival venues.

Located inside the CBC building, the Glenn Gould Studio is the location of the “In Conversation” series. If you need a little bit of a movie break or are interested in hearing the “behind-the-scenes” of the industry, GG is the place to be. A short walk from the Rogers Centre + Aquarium, you can even do a little sightseeing in between.

This venue has a whopping 14 auditoriums. The rush and ticket lines are beyond crazy. Rather than looking at those as negative points, we like to see them as positive. Scotiabank is where you get your true festival experience. Filled with people galore, Scotiabank Theatre is a great place to meet some new friends, and watch multiple films consecutively. Known for its faulty escalator, you’ll definitely need to wear some comfortable shoes. If the escalator is down, you’ll need to trek up those stairs.

Located in the heart of Toronto’s Entertainment district, the Bell Lightbox is the home of TIFF. Close to the red carpet action, this iconic structure, built in 2010, is definitely a class- A venue. Surrounded by cute cafes and prime Toronto culture, the TIFF Bell Lightbox is great for some afternoon screenings. Post-screening, when you head out you might catch a celebrity headed to a premiere at the POW!

During the year, the POW theatre is home to some of the biggest musicals in the world. The Lion King, Chicago, Sound of Music, Anastasia- just to name a few. Built in 1993, the POW theatre is a tribute to the late Princess Diana.  But alas, during TIFF season, it becomes one of the movie premiere headquarters. Stars like George Clooney, Sandra Bullock, Sienna Miller and Joel Edgerton has graced the halls of the POW. The atmosphere and architecture will make you feel like a star yourself.

Opened in 1913, this twin-set is an actual National Historic Site. It is the last operating, well, surviving, Edwardian Stacked theatre in the world. How’s that for a fun fact! Beautiful both inside and out, this theatre is located in a prime tourist spot. It is right across the street from the Eaton Centre, and a short walk away from Nathan Phillips Square. Its floral ceilings and early 1900’s architecture will make you feel like you’ve hopped into a time machine. In fact, you might even get to chat with someone from that era- The Lavender Lady.

Toronto is known for fine wining and dining. Our office is located very close to TIFF, so we’ve got a grip on some of the great King St. eats but, there are many more. Here’s 5 fab food places to check out (in no particular order).

Pool in the sky? During TIFF, Lavelle is the host of many fancy TIFF parties. The rooftop restaurant is definitely one of a kind. One can expect very good truffle parmesan fries, with a side view of the CN Tower. The Asian-American fusion menu is set to serve any taste. 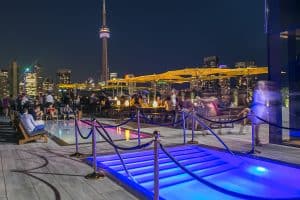 Another pool in the sky? Located in the Bisha Hotel, steps from the TIFF Bell Lightbox, KōST is one of the newest and chicest eating stops. Its Baja-inspired menu adds a little kick to the chilly September weather. While you walk in to get to your reservation, you might see the likes of Olivia Munn stepping out from the hotel to catch a flight. Yes, please.

Between the glitz and the glamour, you might just need a cozy place to chill (RIP Addison’s Residence). Hemingway’s has all the classics, and it’s a little further away from the downtown core. Near the fancy shops of Cumberland, this hidden gem is a U of T student favourite.

El Catrin is a Toronto gem. The Mexican-food hub is across town but definitely worth the walk. From the decor to the food, it is a fan favourite. After lunch or dinner, you can stroll around the historic Distillery District before heading back to a premiere.

Ah, the life of PAI. This restaurant features Northern Thai cuisine. A favourite amongst locals and tourists, it is located between the Scotiabank Theatre and the RTH/POW strip. When eating at PAI, you simply can’t go wrong. The atmosphere is amazing and the food even better.

Dress for the occasion

No, that doesn’t mean gowns and heels. Make sure to wear comfortable shoes and weather appropriate attire. Canada is cold, but Toronto still sees humidity in September. In the words of Drake, thank me later.

Don’t be scared of the rush line!

Chances are that you won’t get a ticket to every film. Don’t skip out on rush lines! They look intimidating but they can move fast at certain venues: RTH, Elgin, Scotiabank

While waiting in line, holding your spot on the red carpet, or even in some theatres, you’ll want that granola bar. There is a lot of waiting at the festival, it’s not a bad idea to have a small snack or two in your bag.

Your battery will die faster than you expect. Especially if you’re doing back-to-back red carpets at venues like Roy Thompson Hall or POW.

If you don’t know, ask

TIFF hires thousands of staff members and volunteers to help YOU each year. Without them, the festival wouldn’t be possible. Rather than figuring it out on your own, take a moment to ask a volunteer about directions, film times or more!

Now we don’t have all the answers, but we’re hoping this small guide will set you on a good path. Happy TIFF-ing!