One Large Step for Women

16 Jul One Large Step for Women

Posted at 23:48h in Expertise, Speaker News by Admin User

Today we celebrate the 50th Anniversary of the Apollo 11 launch to the moon.

This was one large step for men, and a giant leap for women.

Katherine Johnson was a key member in the endeavour. In her time, Katherine was a “computer.” Her calculations were imperative to the mission. Katherine, now 90, had been one of the brains behind syncing the Lunar Lander with the Command & Service Module. 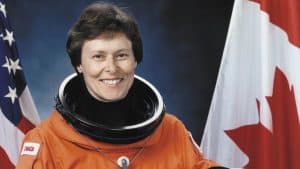 Although, Katherine had not been on the Space Shuttle to the moon, she had paved the way for many women in NASA.

23 years after Apollo 11, Canada’s own Roberta Bondar flew to space in Space Shuttle Discovery. She was the first Canadian woman in space, and the first neurologist to go into space!

As we continue to break the boundaries of technology, we’re excited to see what’s next in space for men, and women.