28 May Brooke Lynn Hytes at Algonquin

Posted at 18:37h in Uncategorized by Admin User

BROOKE-LYNN HYTES BRINGS THE LIGHTS TO THE ACT

Dressed in a skin-tight sparkly bodysuit under the purple lights, The Queen of the North otherwise known as Brooke-Lynn Hytes, slayed the stage with the lip-sync performance of Beyoncé’s Partition.

The first Canadian contestant on RuPaul’s Drag Race made waves at the Algonquin Commons Theatre and was the show stopper for the start of Algonquin’s Pride Week on Sept. 30.

Over 40 fans, were lined up backstage for the meet and greet session before the show, where they had the opportunity to pose for a photo with Hytes. The first floor of the auditorium was near the capacity while there were a few empty seats along the side exits. 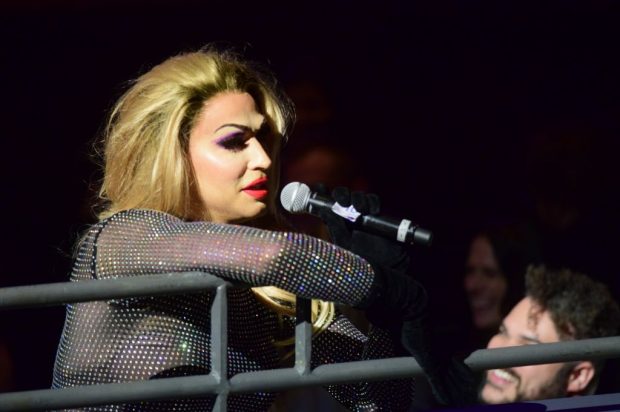 University of Ottawa student, Emily Lombardo said she was excited to watch Brooke-Lynn Hytes perform on stage. “We just saw that they were having the show here, so we wanted to come [and] see,” said Lombardo. “She’s a dancer as well as a drag queen so I feel like that’d be really cool within her show to have the dancing and the drag act at the same time.”

“I mean, she’s just amazing,” said St. Pius X High School student Melissa Lombardo. “She does ballet, that’s like so cool. She knows how to put on a good show.”

It was also announced during the summer, that she would become the first Canadian judge on Canada’s Drag Race.

While snacking on a bag of black licorice in her dressing room, Hytes recalls in an exclusive interview with the Times, that she wasn’t allowed to reveal her judge position to the public.

“I was sitting on it for the whole three months. It was hard, I did so many interviews and they were like, ‘So, what’s next for Brooke-Lynn Hytes?’ and I was like, ‘I can’t say anything,’” said Hytes. “It felt like being announced on Drag Race all over again.”

During her time on RuPaul’s Drag Race, the only thing she wished she could have known before, was how much of a time limit there is to prepare. “Well, I knew a lot because I knew a lot of people who’ve been on the show,” said Hytes. “I think my least favourite thing about it, was how little time we got for everything like to prepare for challenges and stuff.”

The youngest Rupaul’s Drag Race fan was an 8-year-old boy who attended the show with his mom. Hytes then shared advice with the audience by commemorating the show’s impact on the community.

“When I was growing up, there was nothing,” said Hytes. “The way the world is today. There’s so much visibility for every kind of queer person. Parents are now accepting it and bringing their children to things like drag-cons and drag shows.”

In between Hytes’ costume changes, Ottawa’s Drag Queen and winner of Ms. Capital Pride, Adrianna Exposé took to the stage her lip-sync performance of Turn Me On by Nicki Minaj. Shortly after Exposé’s musical number, she realized that she may have pulled a leg muscle and had to sit on stage, in exchange for her second musical number.

“Probably take advantage of this because I’m too weak for whatever I just pulled,” said Exposé, as her audience roared with laughter. “I usually say, ‘slay the stage’, but I think it’s “lay” the stage.”

When Hytes returned to the stage for her second song, which was Céline Dion’s It’s All Coming Back To Me Now, she was dressed in a long-sleeve, snow leopard print dress and an orange wig. Afterwards, Hytes sat on the edge of the stage, where she answered questions from the audience. 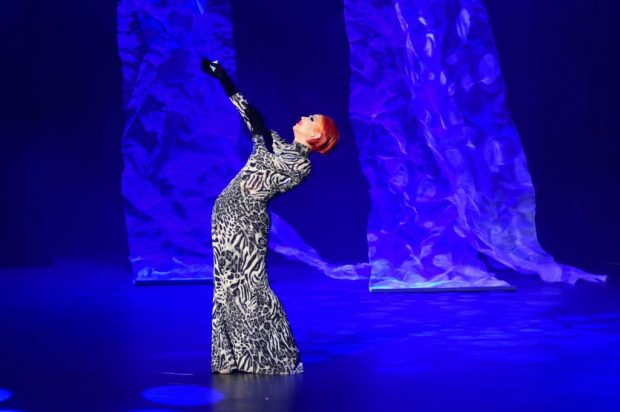 Brooke-Lynn Hytes lipsyncing to Cèline Dion’s “It’s All Coming Back To Me” in the Algonquin Commons Theatre on Sept. 30. Photo credit: Perushka Gopalkista

The audiences’ questions ranged from her time on RuPaul’s Drag Race to where her fashion inspiration comes from.

Despite the fact that she has to slay on the stage all the time, style-wise, she highly recommends thrifting. “Visit your local thrift store. Go dumpster diving. I recommend that over buying things at the mall,” said Hytes. “If you buy something at like, Forever 21 or H&M, make sure you kind of change it up. Never wear off the rack [stuff], kind of alter it – that’s where your creativity comes in.”